This is for a set of Pinhawk SL Single length hybrid’s 5 thru Pitching Wedge. You Choose Shaft Material as well as desired playing length.

Your Set will be custom built to your specs by our Certified Club Maker, using our stock shafts, and standard Tour Velvet Grips. Attractive Headcovers Included to protect your investment.

Imagine playing a round of golf with one iron length, one swing, one ball position and being able to control your distance. Now you can, with Pinhawk single length Hybrid or iron golf clubs. 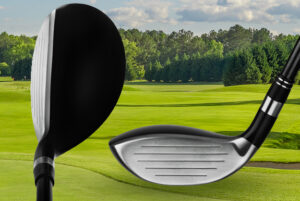 The single-length philosophy is that golfers can concentrate on just one swing, not a different swing for each iron, hybrid or wedge.

You’ve Been Asking for it is finally here!

The new Pinhawk SLH single length hybrid golf club combines the ease of striking a hybrid with the simplicity of Single Length Irons.

The new Pinhawk SLH Single Length Hybrid irons features the same amount of face progression through the set, as well as consistent crown heights. The only thing that changes is the loft of the face which controls your distance gaps between clubs.

The Pinhawk SLH single length hybrids have been designed to match seamlessly with our Pinhawk SL Single Length Irons so you will be able to combine both to customize your set without disrupting the distance gaps between irons.

The loft gapping is slightly wider than traditional irons; this is to maintain a proper distance gap between clubs. You will find that your distances will be very similar to a “conventional” set of irons (independent studies have proven that, along with “real world” play).

Here’s what to expect WITH Single LENGTH GOLF Clubs!

There are no reviews yet.